The Perth Cultural Centre was bursting with texture and colour as the Awesome Festival spreads it's magic abound. 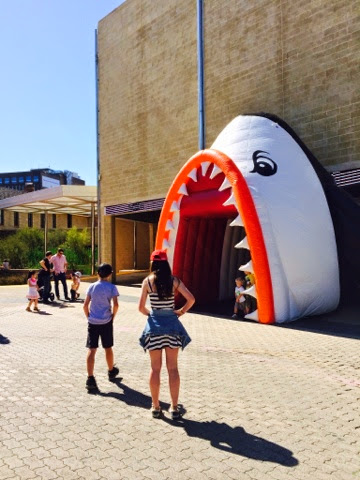 This year's International Arts Festival for Bright Young Things is spectacular! There's loads of activities for the kids that inspire and spark imaginations to create and construct masterpieces all of their own.  Just look for the inflatable structures around the Perth Cultural Centre, and you'll find a creative outlet, show, or demonstration for the kiddies.  Pick up a complete program list and schedule of events at the Ticket Booth across from the inflatable "Awesome" sign in the Urban Orchard.

We started our day at the free "Play Space" activity where the kids worked together to build a life sized "mable track."  My 11 year old son would have been happy to stay there all day as the Chief Building Foreman, but I coaxed him away and promised we would come back later in the week. 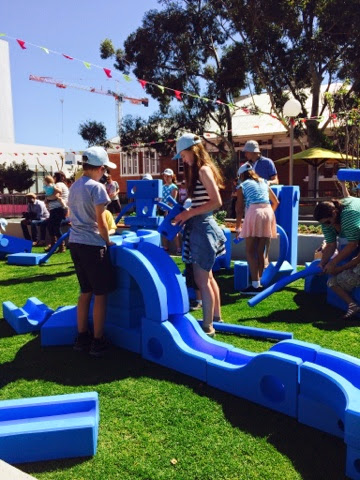 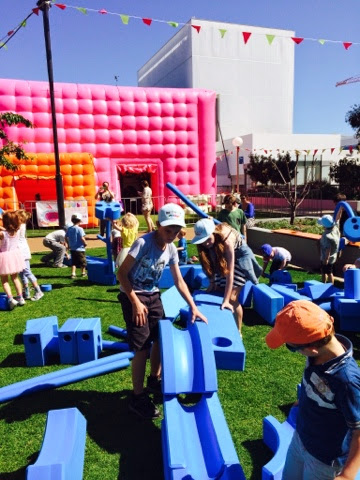 Just behind the free play space, we entered the enormous pink inflatable structure into a "Storybook." Imagine walking into the pages of a children's storybook, and being able to touch, explore, and discover the story in real life! 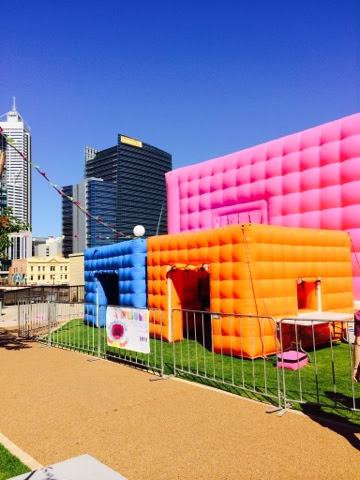 For just $5 entrance, your child can create their own storybook adventure by collecting treasures and experiencing things like the Key Corridor, crawling through the Teddy Tunnel, and tossing puffs of clouds in the Dream Room! They were given a Storybook pouch to keep their treasures and completed storybook in.


Before heading on, we collected our treasures into our Storybook pouch which included the key to Happiness! 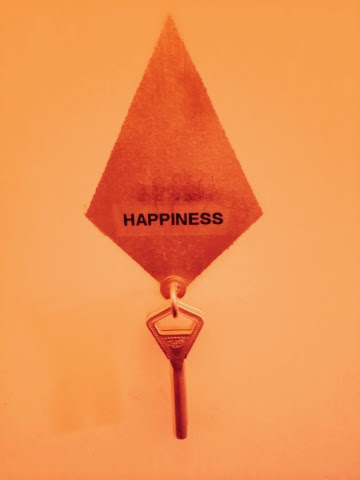 Next, we headed to Activity Central for hands on crafts including badge making and creating a box to add to the Awesome Festival Float.  Both activities were free, and the kids really got into it. 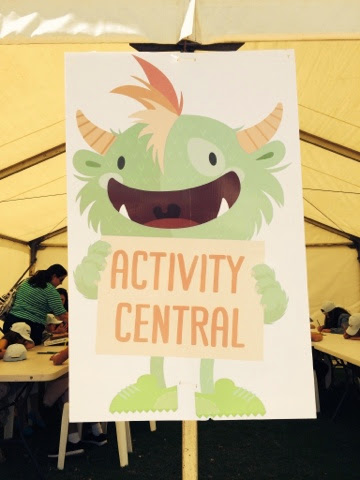 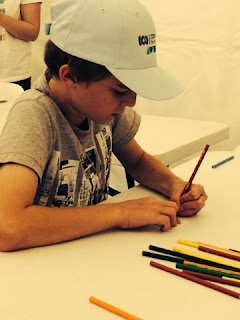 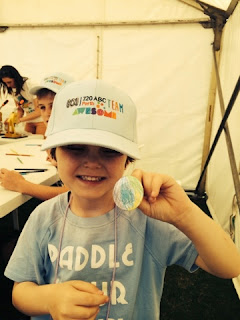 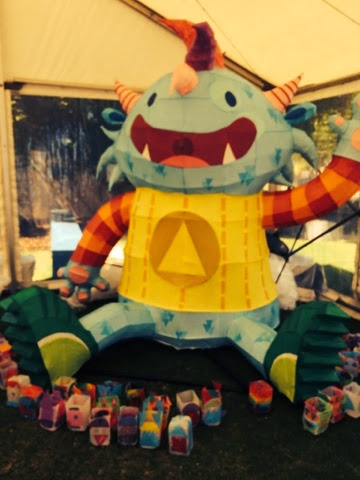 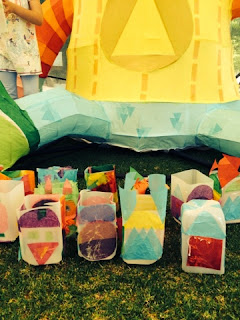 There are several Awesome Festival Activities inside The State Library of Western Australia, including "Laser Beak Man" and "Galloping Tales".

Laser Beak Man was one of my favorite things to "take in" at the Festival.  The free exhibit is worth stopping and having a look.  The young artist, Tim Sharp, has Austism, and used only crayons, ink pen, and paper to create his amazing drawings.

Tim Sharp's artwork was not only colourful and wonderful to look at, but the drawings were so clever and each one had a double meaning, and made me giggle.  Laser Beak Man appeals to all ages, and my whole family loved his drawings. 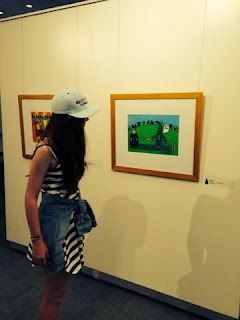 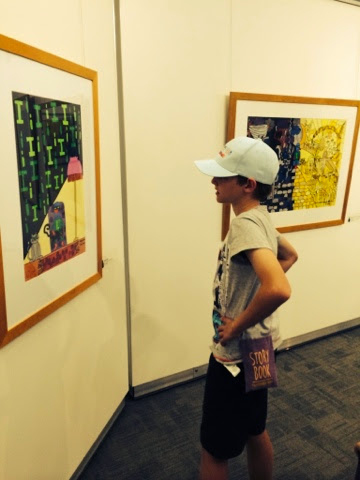 You can take a break in a little hut on a big and watch Laser Beak Man drawings that were turned into an ABC3 production of Laser Beak Man. 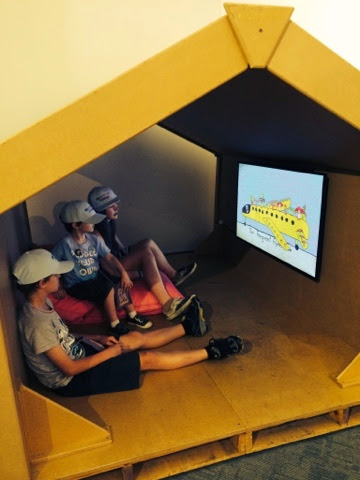 Next, we had tickets to Sticks, Stones, Broken Bones, a show performed by Jeff Achtem. 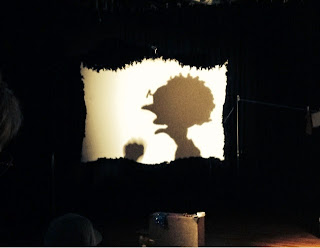 This puppet master will amaze you with his ability to bring shadow puppets to life in such an amusing way.  He had us all laughing!  This was my 13 year old daughter's favourite part of the day by far! 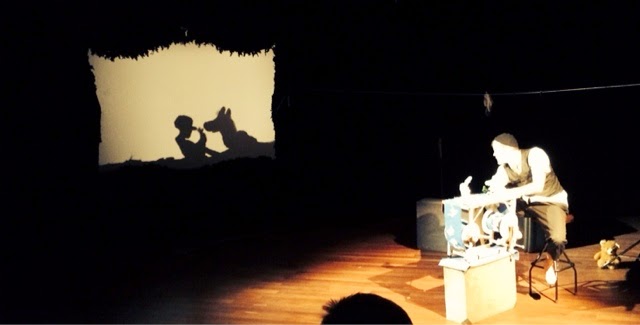 Just out the back door of the museum, in the back corner of the Cultural Centre, we found a big, inflatable tent, and a "hidden gem". 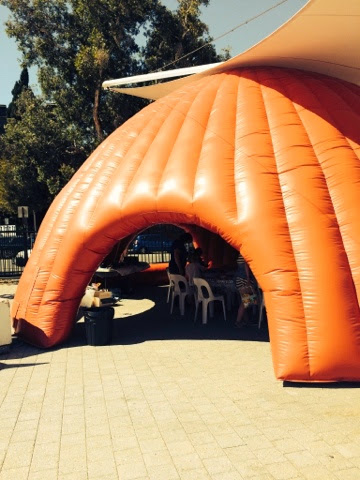 It was a another hands on activity where the kids were able to make crowns and decorate them with jewels. 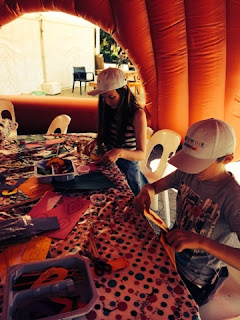 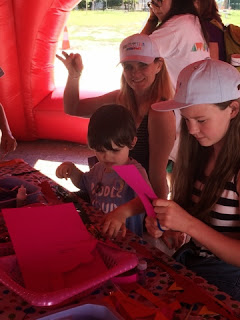 They were even able to dip their hands into large treasure chests and hand pick the jewels for decorating their crowns. 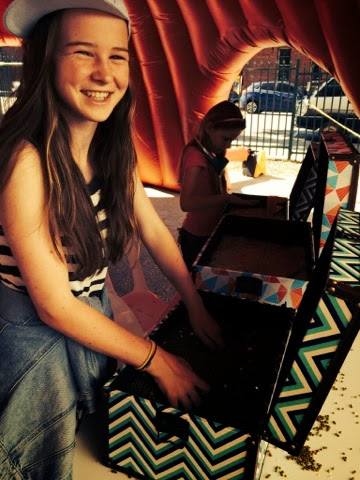 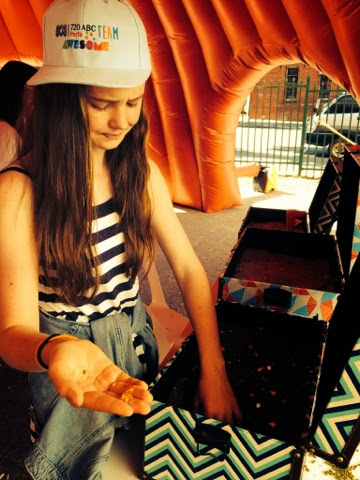 The Perth Cultural Centre is a perfect setting for the Awesome Festival.  It's a great place to hang out with the family, take in some art and culture, and just "hang out".  We had an awesome day! 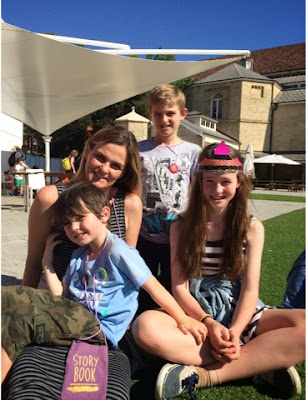 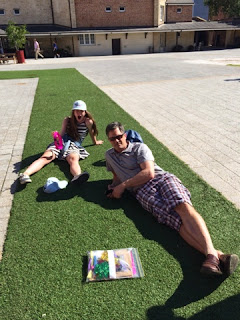 On our way out, my daughter stopped into The Better Beginnings Books To Go tent.  She remembered it from past Awesome Festivals, and wanted to do it again. 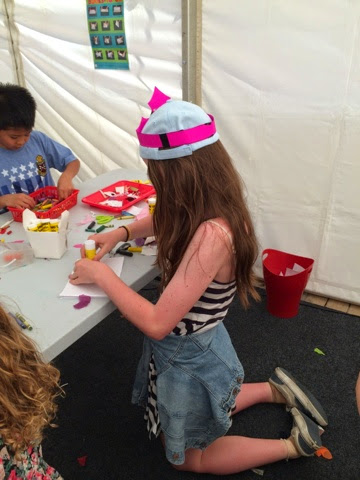 The kids get to publish their own book, and once they are done, they keep one copy for themselves, and leave the other there on the bookshelf for others to enjoy. 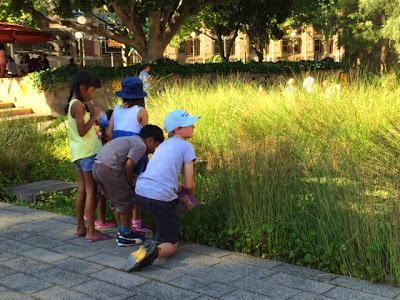 After some frog hunting in the Urban Orchard, our day was complete and we headed home.  There were still many activities that we could not fit into one day, so we plan to return later in the week for some more fun.

The Awesome Festival runs through 13 October at the Perth Cultural Centre.  For a complete list of activities, click HERE.
Posted by Alisha at Saturday, October 04, 2014