A while back a friend of mine posted a link on her facebook page that caught my attention.  Since our life is like one big "culture swap", we decided to participate. 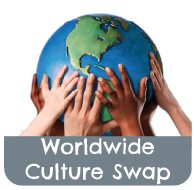 Basically, signing up meant we agreed to put together and ship four packages around the world that would teach others about the country in which we live, Australia.  This was the perfect opportunity  to get the kids involved, because I asked them what items they thought represented Australia and why.    Keep in mind, items were to be inexpensive and lightweight (to keep shipping costs down).  Here is what we came up with: 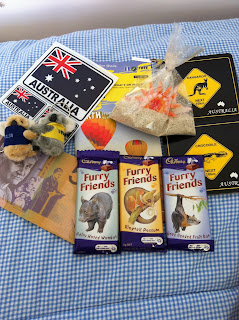 Bag of beach sand with starfish- In our opinion, Australia has some of the most beautiful beaches in the world!  We practically lived at the beach in California, and those beaches, while nice, do not hold a candle.  So we sent a little bag of our beach sand with little starfish inside to represent our glorious Australian coastline.

Cadbury Chocolate with "Australian Furry Friends" on the front-  When we first moved here, we noticed the store shelves stocked full with chocolate!  It's the one item we noticed that had more than enough varieties to choose from.  Australian's love their chocolate, and Cadbury is a favorite brand around here.  The bars we sent have fun furry Australian animals on the front, so it's a double whammy!  Australia is full of interesting animals like the: dingo, wombat, Tasmanian devil, platypus, fruit bat, echidna, and of course the koala, and kangaroo.

A notepad made to look like an Australian $50-  Living in Australia is not cheap!  We added a replica of our money to represent the high cost of living, and because we think the dollars here are so colorful and interesting!

Animal Crossing Coasters-  As mentioned above, Australia is full of critters and creatures!  It is not uncommon to see roadsigns reminding us to be careful of animals crossing.  Here are two pictures of actual signs not too far from where we live: 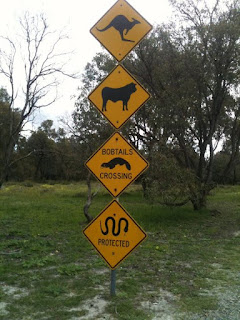 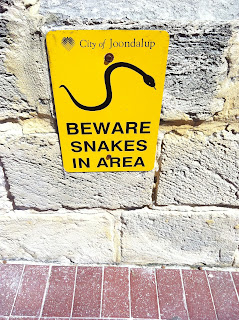 Koala Keychains- Who doesn't love a koala?  We had never actually touched one until we moved here.  They do not live wild in Perth where we live, but it is common to get your chance to pet and possibly hold them at the nearby animal parks and zoo.

Perth Travelers Brochure- Did you know Perth is one of the most isolated cities in the world? (Some say it is second to Honolulu, Hawaii).  The closest city by road, Adelaide, is more than 2,500 km away!
But in our opinion, there is no shortage of interesting activities to get involved in.  Whether you prefer the outdoors, sports, the arts, or the theatre, Perth has it all.

Australia Flag Stickers- The Australian flag had an interesting start.  The design was actually the result of a competition.  Read more about the flag here: http://www.dltk-kids.com/world/australia/flag.htm  I always thought the 6 white stars represented the states, but that's not the case! :)

Perhaps the most unique thing about Australia for us is the seasons.  Since Australia is in the Southern Hemishpere, our seasons are opposite to those of the Northern Hemisphere. Spring is from September to November, summer from December to February, autumn from March to May and winter from June to August.

We learn new things about this country possibly everyday.  For example, Australia is the only country which occupies a whole continent - albeit the smallest continent on earth.  Hopefully you learned something new about Australia from reading this too!

We haven't received our swap packages yet, but we are looking forward to them!  We are swapping with families from The United Kingdom, Poland, Wisconsin, and Delaware. It has been fun exchanging emails leading up to the swap, and reading the blogs from the families that have one.  In fact, the Polish family's blog was written in their native language, so we were only able to look at the pictures! :)  Nevertheless, it was so interesting to see what the rest of the world was up to in a forum other than what the media spills out. 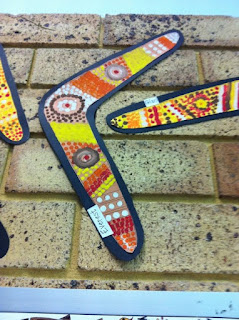 Something we left out of the package that I wish we would have included was an item representing the Aboriginal people.  They are an amazing group of people who have endured many hardships.  I especially appreciate their style of art, and I am so happy my kids are learning about their culture in school.  Above is a sample of my son's Aboriginal Boomerang. Read more fascinating facts about the boomerang here: http://www.dinkumaussies.com/ABORIGINAL%2FBoomerang.htm.

If you'd like to make a dot art project of your own, check out these ideas: http://www.outbackjack.info/dotpainting.html

Or check out the coolest Australian blog with ideas for kids!  http://happywhimsicalhearts.blogspot.com.au/2012/08/10-aussie-activities-for-kids.html


No matter where you live, I recommend joining the Culture Swap.  There are a couple of different swaps you can sign up for, including a US State Culture Swap, Culture Swap for Schools, and  you can even Find a Pen Pal. The culture swap is especially in need of swappers from countries other than the U.S.A., so if you live elsewhere, won't you give it a try?
http://www.worldwidecultureswap.com/

What a wonderful way to share your country with others! Thanks for sharing at the Culture Swapper!

Oh my goodness, are there really those signs everywhere? I'd be terrified :)
Your package looks wonderful and if I received a package from Australia without anything Koala related I'd be a bit disapointed lol
Thanks for linking up your post - I'm adding it you our site now.
Rachael x

I've just discovered your blog and love it. I'm adding it to my blogroll to learn more about Australia, a land I visited and miss :) Best regards from Barcelona, Spain,
Marta
http://abilingualbb.blogspot.com