A Review of The Spare Parts Puppet Theatre Production: Farm

The Spare Parts Puppet Theatre productions have become a bit of a tradition that me and my kids look forward to.

The productions are artsy, in depth, stir up emotions, and make us wonder.

Farm is playing at the Spare Parts Puppet Theatre 27 September through 11 October. 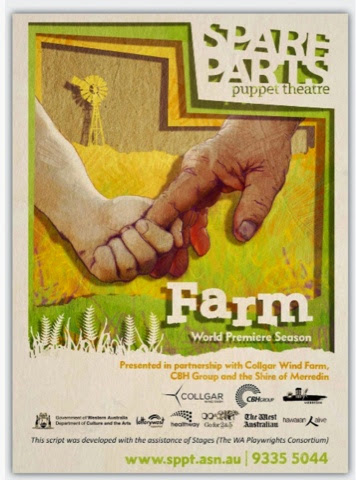 Suitable for ages 5 and up, the story portrays a young girl living on a farm in rural Western Australia with her mom and dad.  The story runs through many emotions including anticipation, excitement, heartache, love, disappointment, sorrow, hope and determination.

There is very little dialogue in this production, but the story comes to life with the help of music, creative use of lighting, shadows, smoke, and even bursts of "fire".

As always, the amazing way the cast manipulated the props on stage kept us wondering what would happen next.  The creative use of dance to portray the animals and the elements such as a big red kangaroo, wind, fire, and rain were amazing.  Our favorite scene was one in which the big red kangaroo came to the farm in the middle of the night and destroyed the crops.  The kangaroo's costume and the way it bounced around the stage had us mesmerized and on the edge of our seats.

There was a lot of research involved in the making of  Farm, including the cast and crew living and breathing real life on a rural farm in Western Australia.  They went on research missions and lived on a location, fully immersed in life in the Wheatbelt farming community of Merriden.  The small community and The Spare Parts Puppet Theatre developed lasting friendships as a result of bringing Farm to life on stage.

Come and see all of the "people" scattered across the lawn outside the theatre created by the children of Merriden. 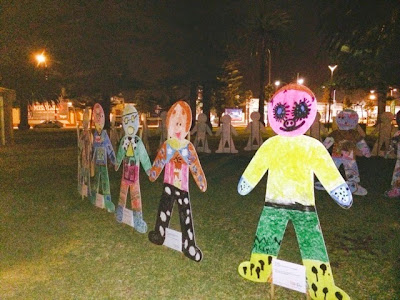 Farm is a cultural experience not to be missed these School Holidays!

The Spare Part a Puppet Theatre is located at 1 Short Street, Fremantle, across from the train station.
Posted by Alisha at Wednesday, September 24, 2014