Best Visit with Santa Ever!

I actually dread bringing my kids to visit Santa.  It never ends up the way I picture it.  There is usually so much build up to the moment, that my kids freak out and throw a tantrum when it's our turn.  Something we have waited all year for turns into a torturous ritual that I have seemingly forced them into.  But, every year, I offer the activity, and every year they accept with enthusiasm.  Most of our Santa photos involve one or two of my children screaming with mouths wide open.  Our most recent photos all have me in them, looking frazzled, but determined.  Although I did have to get in the photo with them again this year, there were no tantrums, and no anxious onlookers waiting for their turn.  This year, me and my boys went to Santaland in Meyer in Perth City, and had our own little private meeting with the man himself, SANTA!

Santaland is located on the second floor on Meyers in Forrest Place.  We passed the Water Labyrinth interactive fountains outside Forrest Place, and I promised my sons a play in them after we visited Santa.

Upon arriving at the second floor, we weaved our way through the toy section and found Santaland.  There were two lines, one for visiting Santa, and another to ride the Santaland Express.

If you plan ahead, you can pre-book your visit with Santa and bypass waiting in line. 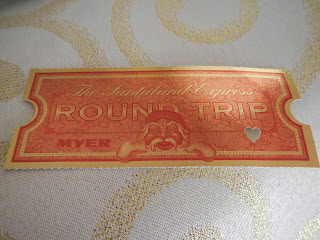 We decided to ride the train first.  Santas Elves welcomed us across the railroad crossing and gave us a golden train ticket.

In this area, there was a movie to watch, a small playground with a slide, and more friendly elves.  There was no line for the train, so my sons had their tickets punched and they boarded the train.  The train chugged around the track two times and the kids loved it!  They were able to ride as many times as they wished, and there was a photographer snapping photos that were available for purchase.

Outside the train area, there was a table and supplies to write a letter to Santa.  There was a box to post your letter to Santa, and every letter will receive a response from Santa in the mail!

Next, it was time to visit Santa.  We waited in line only about 20 minutes.  During that time the elves came by and entertained us with some corny jokes and talk of the North Pole.

When it was our turn, we were lead through a velvet curtain to a door.  We entered the door, and there sat Santa on his cozy throne by a fire, with Rudolf cuddled up sleeping.  It was a really relaxing atmosphere and it only took a minute or two for my fearful four year old to relax.  Before I knew it, he was spouting out his Christmas present wish to Santa, and smiling for the photographer.  Santa spent quite a while chatting to each of my boys, and made the experience very special for them.  The boys were able to give Rudolf some pats before we left, and Santa told them how many sleeps until Christmas.  We were given a Santa beard and door hanger to bring home as gifts.  The elves all waved and smiled at us as we left. 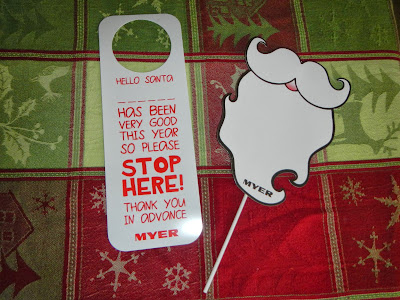 After our visit with Santa, we found a table in the Christmas Chill Out Zone.  The boys ran wild in the Water Labyrinth and we grabbed some lunch from Subway.

A lovely Elf in a red velvet dress brought the boys free helium balloons. There was free face painting for kids (that they opted out of), and a station with plenty of free sunscreen for all.