Can you tell how much this family loves our Soccer Saturdays?

Everest had a muddy, slippery, sliding time at his 9:15 game.  It was every 7 year old boy's dream!  To be honest, I couldn't tell you if they won or lost, but I do know they all had a fabulous time kicking that ball around in the soggy grass. 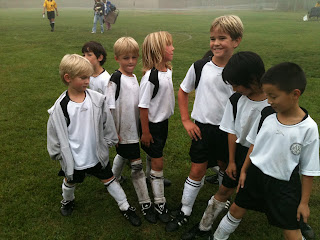 McKinley's team played a fantastic game once again.  The highlight of the game was McKinley's save as goalie that would have made any professional player jealous.  She was fearless and it showed. I don't have a picture of it to post, but the smack the ball made when she caught it, and the look of accomplishment on her face as she dove for the ball will be forever embedded in my head.  A proud moment indeed!

Hagen, well he just kinda hung out like always, wondering what in the world we were all screaming about on the sidelines. 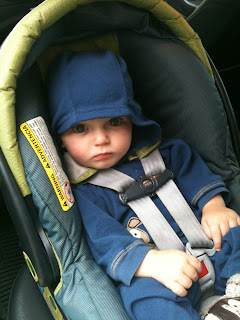 That evening we topped off our Soccer Frenzy with our once a year trip to watch the LA Galaxy play.  If you have never been to a professional soccer game, put it on your list of "musts".  The field itself is enough to make you go "Wow!"  and the player's endurance, stamina, footwork, agility, and skill will keep you watching the whole 90 minutes.  If the game isn't stimulating enough, then the crowd will be.  These fans go nuts for soccer.  It's like a bunch of crazy AYSO parents, just times a couple thousand.  One year we made the mistake of sitting right next to the section of super crazy fans.  They are like a highschool pep squad made up of twenty-something year old men.  They have their faces painted, chant songs, and beat on a bass drum throughout the entire game!  Oh, and did I mention that David Beckham was playing? It was an amazing time. 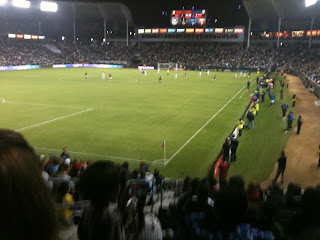