My daughter and I were treated to unexpected laughter last night while attending the Little Red Riding Hood Christmas pantomine at the Subiaco Arts Centre.  It was our first pantomime, so we didn't quite know what to expect. 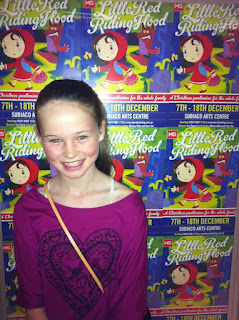 The performance began with Little Red Riding Hood's mother "setting the stage" for the evening.  A cross dresser, she had us laughing and participating from the very beginning, and gave the audience the task of looking for her "huge undies".

Next, we were introduced to Hugh, the heart-struck woodcutter's son, who led us to the forest where we eventually met Little Red Riding Hood, the cunning wolf, and his silly side kicks.  Little Red Riding Hood was not her usual sweet self, but a more adventurous  rebellious version.  Her non-interest in mathes and school may have allowed the sneaky wolf to outsmart her.

Two especially enjoyable characters were the "Bobbies" who were on the lookout for "suspicious suspects".  Their corny jokes, misuse of words, and funny song had us smiling from ear to ear.

Perhaps the most memorable song of the performance was the one sung by the Big, Bad, Wolf and his sidekicks, Slobber and Drool.  I noticed many kids in the audience hiding their eyes with fear, mixed with delight.  The lyrics about eating children were frightening, yet humorous.

The cast of four were amazing and pulled off at least 9 different characters without a hitch.  I hadn't even realized some were playing double parts until the end.

Last night after arriving home, I googled "pantomime" to find out a little about the origin.  Since moving to Australia, I've heard many people talk about pantomimes, or "pantos", especially around Christmastime.  What I found was the panto has been around since the 1800s, and is a "Christmas tradition in London; as much a part of Christmas as decorating the Christmas tree, Christmas shopping, and turkey!" Interested in what pantos are playing in London this Christmas?  Click here.

Now I understand why Little Red Riding Hood was advertised as a "Christmas pantomime for the whole family", although it only contained one Christmas song at the end.  "We Wish You a Merry Christmas"  with a twist, including "Gangnam Style" dancing, was a terrific way for this uplifting hour of comedy to end.

well what i can say about this article that it is written in a great manner i really admire
your writing style, hope you may keep posting these kind of interesting posts.
epoxy coatings
glue removal