We went to the Awesome Festival on Saturday, the day it opened in Perth.  My two bigger kids were selected to review the festival for 720 ABC Perth, so they were able to take a special behind the scenes look, and yours truly tagged along. 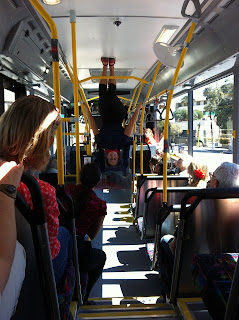 Our tour started with "Back of the Bus", where we actually boarded a Transperth bus and watched a performance while travelling around the city.  It was a hoot, as you weren't quite sure who the performers were until they started dancing, singing, or acting!  The performance even included two stops where we got off the bus and had some fun with the performers.  Expect the unexpected, relax, and let yourself laugh at the peculiar "passengers", after all, they're only acting! 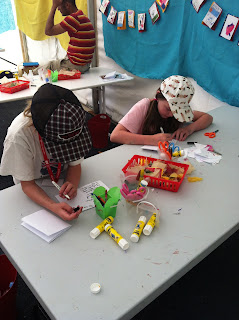 Better Beginnings Books-to-go was surprisingly my kids' favorite!  They wrote, illustrated, and published their own books.  I had to coax my 9 year old son to bring a blank book home to work on it later because he wanted to write a sequel! Great stuff!  They loved that a copy of their books were put in the book cubby for other children to enjoy. 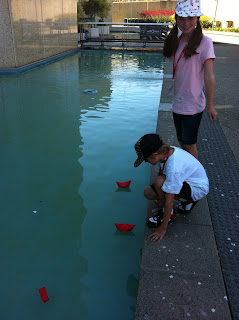 "If Wishes Were Fishes" is a must do at the Festival.  Write your wish on a sheet of paper before folding it into a little red boat. How fun it was to see the smiles on the kid's faces as their wishes floated away on the pond of wishes. 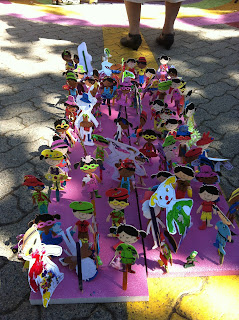 Be sure and stop off to make a miniature of yourself for the Festival Parade! 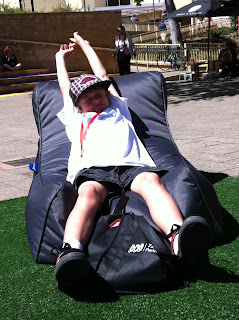 Need a culture break? There's plenty of these loungers around the Perth Cultural Centre for a bit of stretch. 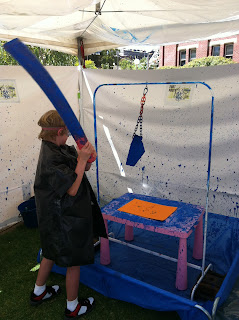 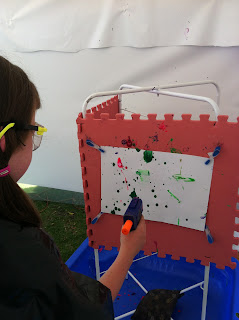 This was a well thought out, wonderfully organized way for the kids to get creatively messy, all the while making a masterpiece suitable for framing! 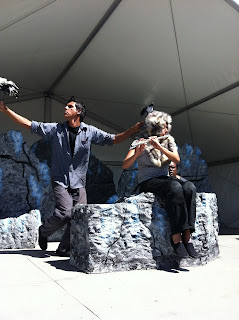 We were treated to a stage performance of "Kaarla Kaatijin" in The Bird Hide Outdoor Theatre.  The show was superb, complete with live music, singing, and puppets.  The story was rich with culture and beautifully told. However, it was a good thing the event staff was passing around the sunscreen, because we were in direct sun during the performance, and it was HOT!

Be sure to seek out at least one of the pianos scattered around the CBD and tickle the ivories.  My son felt like a concert pianist playing on this decked out piano.  He was thrilled when people passing by stopped and listened to him play.  A truly proud moment for him (and me!).

We spent an entire day at the festival, and there was still so much more to experience.  Maybe we'll just have to go back.  Job well done Perth... Awesome!